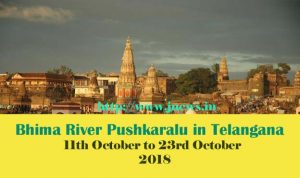 The Bhima River is a major river in Western India and South India. It flows southeast for 861 kilometres (535 mi) through Maharashtra, Karnataka, and Telangana states, before entering the Krishna River. Bhima Pushkaralu 2018 starts on October 11th  and will go on till October 23rd. It is celebrated when the planet Jupiter enters the Vrishchika rashi or Scorpio zodiac sign. Several places in Telangana along the river bhima will be celebrating this festival with great devotion. Check Telangana Bhima Pushkaralu 2018 Dates, Places, Pushkar Ghats, Temples, Pooja Online Booking,  Pooja Prices and other information

Pushkaram or Pushkaralu (in Telugu) ,Pushkara or Pushkar (Sanskrit word) is an Indian festival dedicated to worshiping of rivers. In astrology also we find a reference to the word pushkara refered to as pushkara Navama that purifies and nourishes the quality of the planet within it.  Pushkar is the none of a famous pilgrim centers known as pushkara is name of famous pilgrim centers known as pushkara kashetra is located in Rajesthan about 7 km from Ajmer city. It is said and beloved that the take here known as pushkara lake was the creation of lord Brahma on the banks of which he performed penance for several thousands of years. You will find  here one of  very few temples where lord Brahma is worshiped pushkara or pushkaram is festival of particular river celebrated once in 12 years based on the transits of Jupitar (Brihaspathi) in the Zodic Sign.

Bhima River Pushkaralu in Telangana 2018, millions of devotees take a dip river Bhima  during the first 12 days of the festival for would be relieved from all the sins. Large numbers of pilgrims arrive from all over India to have holy dip at the Bhima Pushkaram.  Bhima Pushkaram in Telangana Parambha Muhurthuam 2018 will be at 7:20 PM, 11th, October, 2018  Gurugraha will enter Vruschika Raasi, in Krishna mandal of Mahabubnagar district. Many of the pilgrims are going to take part in Pushkara Snanam. By, taking the bath in the river during the time of pushkara, people will be blessed by the river with prosperity, good health. The tradition of pushkaralu is coming from years. It is the ancient custom to respect the rivers.

Bhima Pushkaralu is a festival of River Bhima  when Jupiter arrives from  Vrishchika rashi or Scorpio which normally occurs once in 12 years. This Pushkaram is observed for a period of 12 days from 11th October to 23rd October, the 12th day of the festival will be attended by millions of devotees who will participate to take dip in the holy water and do ancestor worships.

The banks that come across the Bhima River are called as Pushkara Ghats. Special arrangements have been made for bathing the devotees in Bhima during this festival. Everyone has a belief that whoever visits the Bhima Pushkaram must take a holy dip in the river Bhima which improves their Physical and mental abilities along with getting rid of their sins.

Several rituals and poojas will be conducted on the banks and in the temples across the various ghats of the river. Homams and chanting of vedas, Sahasranamam and cultural activities in the evenings have been planned . Telangana State government are making elaborate arrangements for the pilgrims to   to perform the ritual smoothly. Poojas made available by the government at all the Telangana Bhima Pushkaralu 2018 Ghats are

Mahasankalpam : Mahasankalpam is appeasing and praying pitru devatas by chanting their names and gotras for removing our birth bad karmas and sins.

Laghusankalpam: Laghusankalpam is taking a dip in holy river by uttering our names and gotras to get favours from deities in present birth life.

Prayaschittam: Prayaschittam is a type of confession according to Hindu mythology. It is observed by women to get rid of their sin or known or unknown mistakes if they mate with men during menusration perid.

Gouri Pooja: Gouri Pooja is conducted by Hindu devotees at holy riverside to please goddess gauri which is also known as kumkumarchana.

Ganga Pooja: In pushkara period, all rivers waters mix with Bhima water, so ganga pooja is conducted to appease all deities at once.

Musivayanam: Musivayanam is an important and compulsory religious dharma in Hindu community in which a sumangali is respected and offered with gifts when a woman dies and her husband is alive. It is for attaining salvation for that woman.

Pindapradanam: Pindapradanam is the most important program during pushkara period observed by Hindus to offer pindas to their nearest 34 relatives and family members who are dead. There is a belief that this ritual provides salvation after their death and they can reach to good lokas and get ultimate moksha.

1.The devotees are advised to take the holy dips at any of the identified Pushkar Ghats for their safety and security.

2. The pilgrims are advised to choose a Ghat that is closer to their stay.

3. Devotees are requested to immediately alert the security officials of Pushkaralu if they found any suspicious or unclaimed objects.

4. Devotees are requested to cooperate with the Traffic regulators for smooth movement of vehicles.

5. Devotees are advised to follow the advice/ directions as intimated to them through various means like Public Address System, electronic screens, notice boards and any other material provided by the administrators.

6. Please use garbage bins for disposing the waste.

7. Devotees are requested to wear traditional attire that befits the religious mega event.

8. Please carry biodegradable carry bags. Avoid use of plastic all the times.

9. Do not wash clothes or use detergents, shampoos, soaps in Ghats while bathing.

10. Do not overcrowd the vehicles or boats. Wait for the next vehicle/ trip.

11. Devotees are advised not to encourage alms-seekers.

12. Don’t pollute the River Bhima by throwing Pooja materials into it.