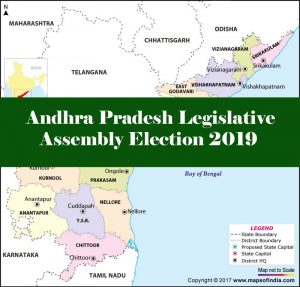 All citizens who turned 18 years on 1st January, 2019 and registered  as electors will get opportunity to cast their vote in the upcoming  Lok Sabha elections and in the respective Vidhan Sabha elections of  those States where it will be held. Those who turned 18 years on 1st January 2019 and are eligible, but yet to be registered as electors,  they still have opportunities to register as electors. Through the  media, they are requested to apply urgently online through nvsp.in  or offline through the BLOs of the concerned polling stations or in the electoral registration office.

Parliamentary Constituencies : Total number of seats as allocated are  25, SC-4 and ST-1.

Elections to the 175 Assembly seats and the 25 Lok Sabha seats in Andhra Pradesh, which will see a single-phase election, will be held on April 11, 2019. Results to the Assembly and Lok Sabha Elections will be announced on May 23, 2019, with the counting of votes taking place on the same day.